Remote control quadcopters have been around for years, as has been "First-Person View" flying. If you're new to the hobby, plowing an expensive FPV racing drone into a house might not seem too appealing. There are also some considerations imposed by the FAA. However, there are indoor miniature quadcopters now, and here's how to put one together on-the-cheap. You can go from zero to FPV for about $70, including the drone, remote control, and goggles.

You'll need the following parts, all of which are available online. While a soldering station is required, all of the contacts soldered are large.

There are many options, but you want something with a 65 mm span between diagonal motors. These are the smallest, readily available size and are often referred to as "tiny whoops." I bought an Eachine E011C (Banggood) which includes:

Low-cost FPV drones usually broadcast analog video in order to minimize latency and cost. We want a camera with a built-in 5.8 GHz transmitter. While there are both NTSC and PAL cameras, the important thing is that the goggles match. That said, most newer cameras can switch between NTSC and PAL modes as well as many frequencies.

Here are some options:

Any pair of goggles that matches the frequency and video standard of the camera will work. The Eachine VR006 (Banggood) is the lowest priced goggles I could find with reasonable reviews. If you need goggles faster, the Makerfire Mini FPV goggles (Amazon) are more expensive.

While the goggles are the most expensive single component of this build, they can be used in future builds.

While everything above is the bare minimum to start flying, these parts have enough added value that they're worth considering: 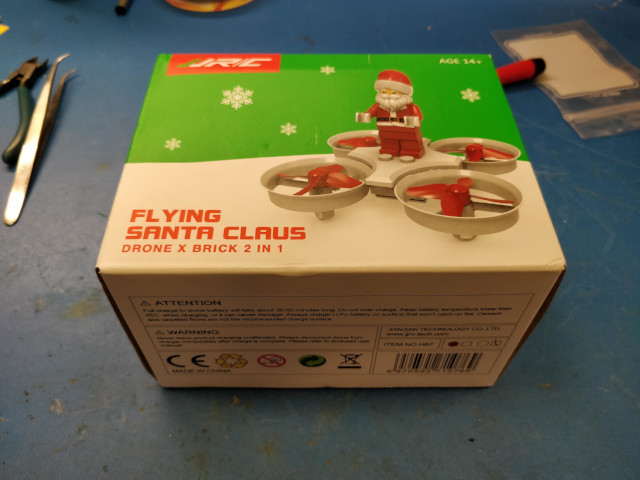 However, the medley of Christmas music gets old, and the speaker is added weight. The speaker is on the bottom of the quadcopter, attached to the PCB. You can see it under the battery holder. 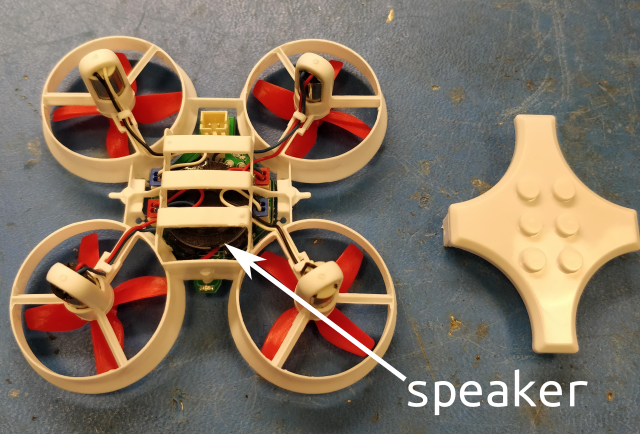 Desolder the black and red wires connecting the speaker to the PCB pads. 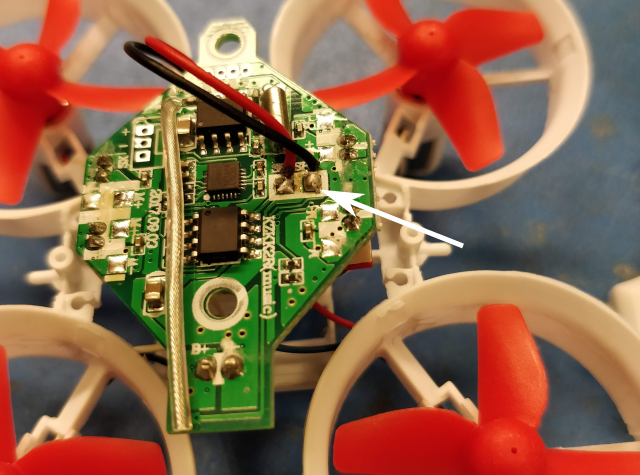 Optionally, remove the battery header that is soldered to the PCB and replace it with a wired connector. 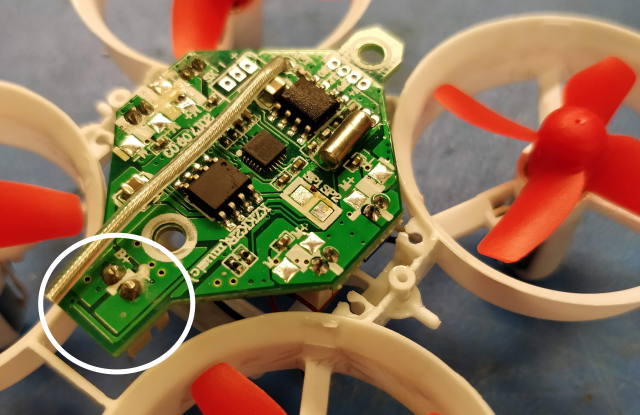 Be very careful to make sure that the red and black wires connect to the positive and negative pads respectively. 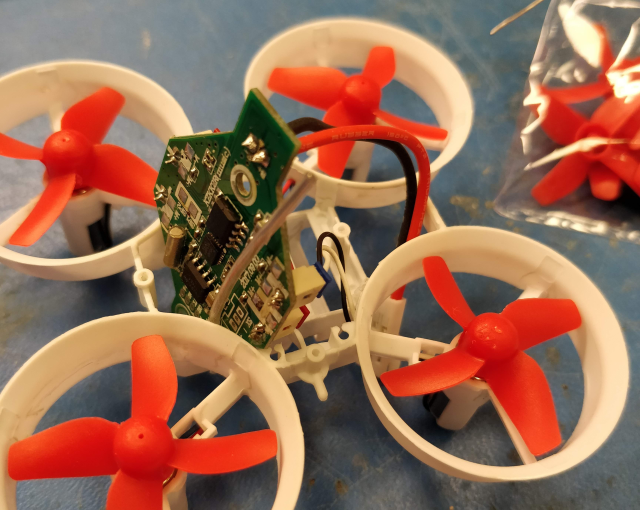 Cut the connector of the camera, leaving as much wire as possible. Strip back the wires and solder the red and black wires to the positive and negative battery terminals. 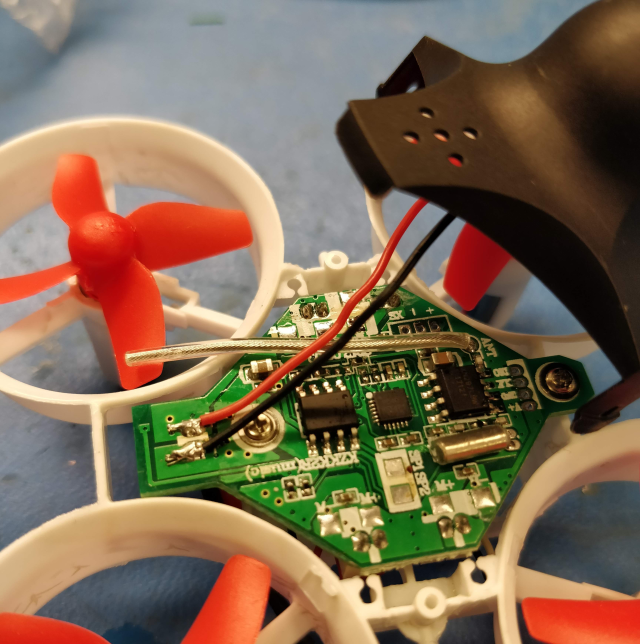 Since this camera comes preinstalled in a canopy with an insulating bumper on the bottom of the camera, assemble by gently pulling apart the camera's bottom tabs and slipping them over the posts on the frame. 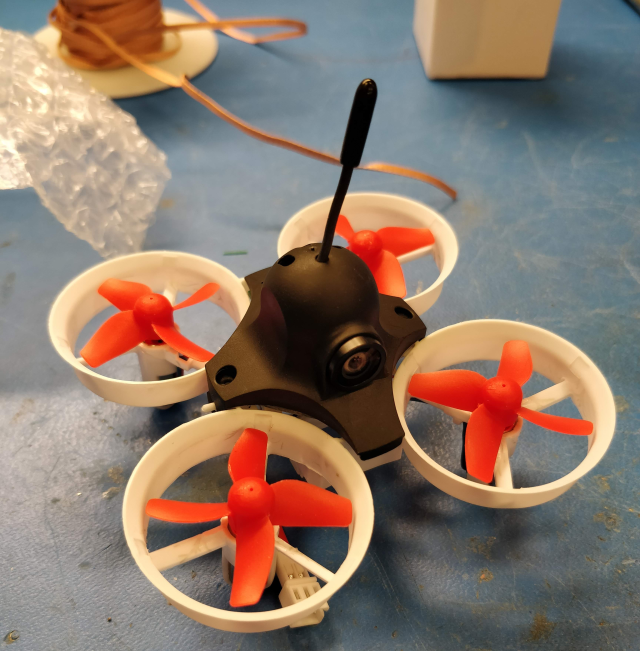 Charge the quadcopter's and goggle's batteries. Power everything up and use the frequency scan on the goggles to find the camera's video signal. 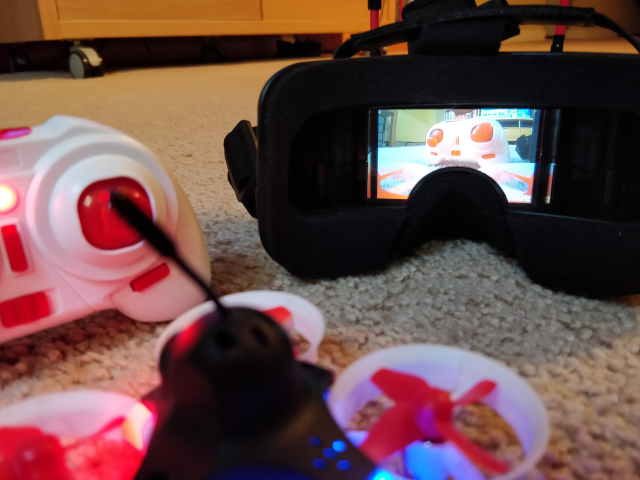