Automated planning is a field of AI techniques for determining how to transform the world from an initial state to a goal state. This guide implements a form of classical planning in which we represent the problem domain as a set of state variables that are modified by each action taken.

How to Boil Water

We'll explore a toy problem domain: a kitchen with an empty pot sitting on the counter, a sink, and a stove. Our goal is to boil a pot of water. 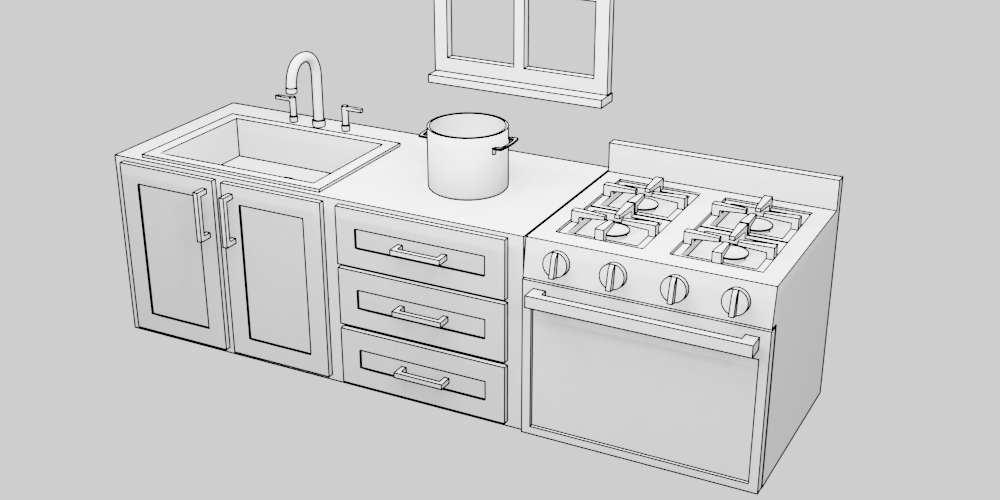 The initial state, s0, and goal state can be described as:

By the time the planner is done, we want a full pot on a lit stove. While the world states must be completely defined, there are some variables we don't care about to satisfy the goal. We don't care where the chef ends up or and whether the faucet is running.

However, if the chef had moved before they were holding the pot, only the chef's position would have changed.

Also, there are some actions that don't make any sense for a given state. From s0 or s1, the planner couldn't have the chef turn on the faucet, since they're not standing in front of the sink. There are preconditions that must be met for some actions to be valid at a given state. The network of all possible states connected by all valid actions creates a graph, and so the problem for the planner is to find the most efficient route through this graph from initial state to goal state.

A pseudocode implementation is available on Wikipedia, and it can be translated directly into Python (source):

There are tons of resources on this algorithm available online that do a thorough job explaining it, but there are a few important concepts:

At each iteration of the search, the search algorithm:

We'll test the implementation with a simple map of nodes that have positions and edges with a traversal difficulty. 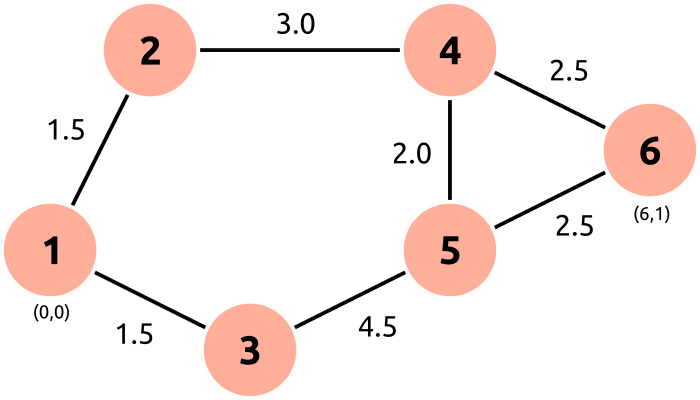 Node 1 is the start and node 6 is the goal. The nodes are physical locations on a Cartesian coordinate system, with node 1 at (0, 0) and node 6 at (6, 1). The difficulty of traveling between nodes is shown on each edge of the graph. Note that it is not necessarily the same as the distance between the nodes. The edges and positions of the nodes are described by two functions:

Even though we know how much it costs to go between any two nodes, the cost to move from any node to the goal isn't, as we don't know what route through other nodes is necessary. However, we might expect that the distance from a node to the goal would be a decent estimate. Our implementation will use the Manhattan distance as the heuristic.

That gives us all the pieces we need to run the path finding algorithm.

The full example is here. Play with the edge costs and see how they affect the selected path.

There's something really interesting here: the a_star function doesn't care what a node is. So long as a node has a unique ID and a neighbors function returns the cost of getting to new nodes with unique IDs, there's no reason this function can't operate on states and actions.

The A* search relies on being able to uniquely identify nodes. The dictionaries we store f and g scores in need to be able to identify if a node is new or is being revisited. When we ask for the neighbors of a node, it's very possible that we are doubling back. In the toy example earlier, we manually gave each node a unique ID.

Fortunately, since we're storing this information in dictionaries, and Python dictionaries can treat any hashable datatype as a key, we just need to make sure our state is hashable. To do this, we use the namdetuple factory function. Technically, we could use tuples, but these will make the code more readable.

The following captures the state of a node in the boil-water problem domain:

One thing to note with tuples is that they are immutable. Their values can't be changed, but a new tuple based on another can be created.

Now that nodes don't represent physical locations, the Manhattan distance no longer works as a search heuristic. If the goal is to find a node as similar as possible to the goal, a node with fewer differing variables is likely closer to the goal. Remember, it's just an estimate to improve the search performance, not crucial to the ability of eventually finding a path.

We'll also recognize that not all state variables matter to our goal. In the implementation, a goal is the same type of namedtuple as a state, but we won't fill in all the fields and let variable that aren't important default to an Ellipsis (...).

Describing Neighbors in the Problem Domain

The last piece missing for A* is the neighbors function. It still receives a node in the graph, now a state, but the edges between nodes, actions, are going to be more interesting. Start by adding the states that result from a "move" action:

We start out by adding all possible move actions. The chef can move to the sink, counter, and stove at will, but it doesn't make sense to allow the chef to move to a place that he's already been. This is the precondition, and if the precondition isn't met, there is no new node connected. The neighbors function will discard it before returning the list of all neighboring state nodes. This is very similar to the approach taken by classical planners like STRIPS, except it is extended to operate on procedural conditions as with GOAP.

All actions can be defined as functions that return a 3-value tuple with the new state, the cost of the action, and a text string describing the action. The text description isn't necessary for the A* search, but it will capture the action required to get from the start to the goal.

All of the actions the chef can take are defined in the same manner: first, check if the preconditions are met, second, return a new state with the effects of the action applied. The final list of actions is:

The rest of the action functions are here.

A tweak to the A* search algorithm is required to keep track of the action descriptions. Previously, every edge implied a "move," so it wasn't needed before.

With this change, the planner is run the same way as before.

The search result is:

This looks pretty good, but we left the water faucet running! If we look back at s_goal, it's because we didn't require the faucet to be off in the goal. Making the responsible modification to the goal, the new path is: