Back in 2013, I programmed an inexpensive media remote to control XBMC on Ubuntu with the help of a cheap infrared PC remote control. Since then, I’ve messed up that Ubuntu install pretty well, so updating seemed like a good idea.

I installed Linux Mint 17.1 and Kodi, the latest incarnation of XBMC. Unfortunately, some of the media keys on the remote did not work, e.g. play. Whenever I pressed them, I received a do-not-enter circle-cross symbol whether or not Kodi was running. Eventually, I found that the media keys worked properly for Banshee, and this lead me down the path the Mint was consuming the commands. Eventually, I found a posting that resolved the issue by clearing out Mint’s keyboard shortcuts.

How to Fix It

Screenshot from 2015-01-27 16:29:21In the Linux Mint 17.1 settings, any assigned keyboard shortcuts prevent Kodi from seeing the remote commands. I cleared out all of the keyboard shortcuts under “Sound and Media” as “Launch email client” from the “Launchers” category. The shortcuts configuration window is available from System Settings > Keyboard in the Keyboard Shortcuts tab. 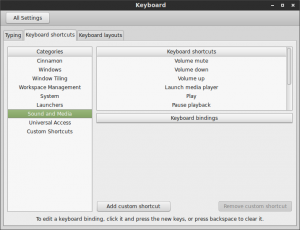 After this, all of the shortcuts from my earlier post work.

The shortcut configuration window is actually a screenshot from Mint 17, but it’s nearly identical on 17.1.