Magic cards are expensive and dumb.

Eliminate all six of the other players’ cards to win by playing higher cards against them.

All players are dealt six cards which they must arrange face-down in front of them in 2 rows with three columns. The remaining cards in the deck are placed face down in the center of each players’ fields. As cards are drawn from the deck, they may be discarded right next to it. Any number of people may play, just adapt the field to suit the number of players. 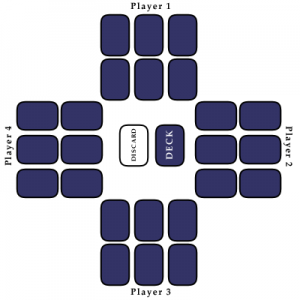 In our example game with four players, the game progresses in sets. The order of each player in each set is determined by drawing from the deck. The player with the highest draw moves first, followed by the second highest draw, with play continuing in the same direction until everyone has made his or her moves for the set. After all players have gone, everyone draws again and the process continues. When only two players remain, there is a final draw by each player, and the highest drawer goes first and the two alternate until the end of the game. There is no longer any more drawing to determine order.

Assume we are starting with six face down cards in our field in front of us. At the beginning of every turn each player is given 5 summon points to use to flip up cards. These are NOT accumulative between turns. This means a player can flip up a 2 through a 5 on any given turn, any card with a summon cost less than or equal to 5. To summons cards with a higher summon cost, already face up cards may be flipped down to add their face value to the 5 summon points of their turn. The face value of a card is the same as the number printed on them. Face cards run 11 through 14, Jack through Ace relatively. A card may only be flipped up once and down once in a turn, not necessarily in that order. As many cards as the player desires (within his own field) can be manipulated to draw on enough summon points. Extra summon points are eliminated at the end of the summon/swap phase of the player’s turn. If a player chooses to swap, the may put ONE face-down card face-up in the discard pile and replace that same position with a face-down card drawn from the deck. A player may choose to EITHER summon or swap in this phase of play.

The last phase of the player’s turn allows him or her the option of either swapping the positions of two face-down cards, or moving one face-down card to an open position. Face-up cards may NOT be moved. Each player must follow the above order of phases although any or all of the phases are optional. A player may not go more than three turns without performing a Summon/Swap or Attack.

When all of a player’s back row or front row are eliminated from a row, all positions are treated as a front row for that player. This player may only regain the ability to use two rows if he or she gains four cards by having an opponent forcibly flip up a heart.

If the deck runs out, reshuffle the discard pile and place it upside down as a new deck.

These apply to cards in various situations, from attacking/defending to determining then necessary attack points to function

Face value – the number printed on a card or what would be assigned to it if numbering continued (7h = 7, 9d = 0, Jc = 11, Qd = 12, Kh = 13, Ad = 14) Real value – value of a card after its special modifiers are applied to its face value Summon cost – the amount of summon points required to flip up a card, usually a card’s face value Attack cost – the amount of attack points required to start an attack